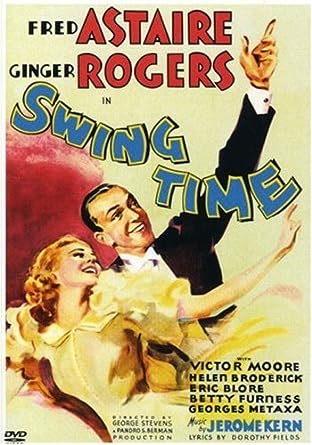 GUYS GUYS GUYS GUYS GUYS. I can’t even begin to tell you how excited I was this week. After years of only seeing clips here and there of their awesome talent, I was finally going to sit down and watch an honest to goodness, feature length Fred Astaire and Ginger Rogers classic! There was no doubt in my mind that there would be lots of cheap puns, cooky misunderstandings, and accidental misrepresentations that are always the bedrock of comedies from this era. There was bound to be crooning and flowing gowns that floated just right while waltzing and tapping. Of course, there was going to be more dancing than one would think humanly possible, too, because FRED AND GINGER, duh! And there would be … misogyny? Degenerate gamblers? BLACKFACE? Ohhh Fred. Say it ain’t so.

First, let’s get this premise business out of the way. Fred Astaire plays John “Lucky” Garnett, a dancer/degenerate gambler who shows up two hours late to his own wedding, mostly because he scheduled it at the same time he was expected to be on stage with this dancing troupe. When he finally arrives to ostensibly marry his bride, all the guests have already been sent home and the bride and her father are more than just a bit put out. Lucky promises his bride’s father that he’ll make $25,000 and return to, as I understand it, pay said money to bride’s father in order to marry her. So, in the first five minutes, we’re already treating women as property. Though, for her part, the bride doesn’t appear to be too upset about it. Lucky heads off to New York City to make his fortune and, almost immediately upon his arrival, begins to charmingly lie, cheat, and gamble his way into the heart of young Penny Carroll (Ginger Rogers). Of course, now that they’re in love, Lucky has to figure a way to tell Penny that he’s already engaged. The best he can think of is to just never make $25,000 at one time. That way, he never has to return to marry poor Jilted Bride. Of course, Jilted Bride eventually comes to New York to find her groom. Penny uncovers the truth and, brokenhearted, agrees to marry a Ricky Ricardo wannabe who’s been after her for ages. When Jilted Bride and Lucky finally have a minute to talk, she explains that she only came to the big city to tell Lucky she’s in love with someone else. Realizing he’s free and clear, Lucky runs off to stop Penny’s wedding by … stealing the groom’s pants. That’s actually how the movie ends. Fred Astaire steals Ginger Rogers’ groom’s pants and they decide they can’t get married after all. Then they all laugh about it as the giant “The End” fades in over top of them in ornate script.

Now, before I go any further, let me be clear: Fred Astaire and Ginger Rogers are phenomenal performers. I enjoyed every last minute of the scenes where they sing and/or dance. But that’s about all I enjoyed.

The plot itself was beyond contrived. As a fan of classic movies, I was prepared for a goofy scenario that could have been cleared up in five minutes if you didn’t want to make a movie out of it. But the plot of Swing Time is in a category of supremely stupid all by itself. First, Lucky is late to his own wedding because of the aforementioned scheduling conflict. However, he’s actually made to miss his wedding by the other members of his troupe, who apparently have no talent of their own and realize they will be out of jobs without Lucky’s talent to carry them. They come up with a  scheme to make him so late that the bride will think he didn’t show. Their “clever ruse,” mind you, is to tell Lucky that his pants are lacking cuffs, which is the new style, and get him to agree to let them take the pants to the tailor. Then, while waiting for his pants, they distract him with a rousing game of dice. By the time his pants return, Lucky is so involved in throwing dice with unparalleled grace and panache and winning the hard earned money of his so called friends that he actually forgets that he was supposed to be in a rush to his own wedding. The bride, of course, is only upset until she hears that Lucky is willing to buy her back for what amounts to a princely sum in 1935. By no more than 2 days later, he’s in love — for realsies this time, you guys — to a ginger Ginger who can dance like no other. SOMEONE WAS PAID REAL AMERICAN DOLLARS TO WRITE THIS. Even by the cheese-tastic standards of the day and the fact that they only needed to create excuses for Fred and Ginger to show off their moves, the writers of this script should be ashamed of themselves.

What the writers probably did with their fat studio paychecks.

Even worse than the script itself was the elaborately staged and innovatively filmed 8-minute dance number in which Fred Astaire dons blackface and dances to a song called “Bojangles of Harlem.” Now, again, as a fan of classic movies, I’ve gotten used to the subtly whitewashed level of racism you’ll find in most of them — people of color were, at this point, basically relegated to roles as servants or, if they were lucky,  comedic side kicks. Usually, it’s not that much different from watching any major modern Hollywood movie — if it stars Kate Hudson or Katherine Heigl or some shit, you can bet good money there aren’t going to be many prominent roles for people of color.  This ornate dance number, though, which began with a pair of giant shoe soles made to look like a giant black face — complete with giant red lips — was much more than I expected. It was downright fucking disturbing. You can say, “Those were the times” and “But AL JOLSON” all day long. You’ll still never convince me that someone on the AFI panel in 2007 couldn’t have stopped them all for a moment and said, “Hey, guys, maybe we pick one of the 9 other Fred and Ginger movies that doesn’t involve an uncomfortably long overtly racist dance number. Whaddya say?”

How the AFI panel would react to that statement, I presume.

All in all, Fred and Ginger’s performances were everything I expected and then some. If I hadn’t been so distracted by the fucking blackface, I would have been wildly impressed with Fred’s dancing during those 8 minutes, too. So, without having seen any of them, I say that if you want to watch a Fred Astaire and Ginger Rogers classic, pick any one but Swing Time.  — KS

Posted in Kerri Smith, Movies
Love the show? Help keep the lights on! Become a Patron!